5 Things We Learned from “Think Again” by Adam Grant 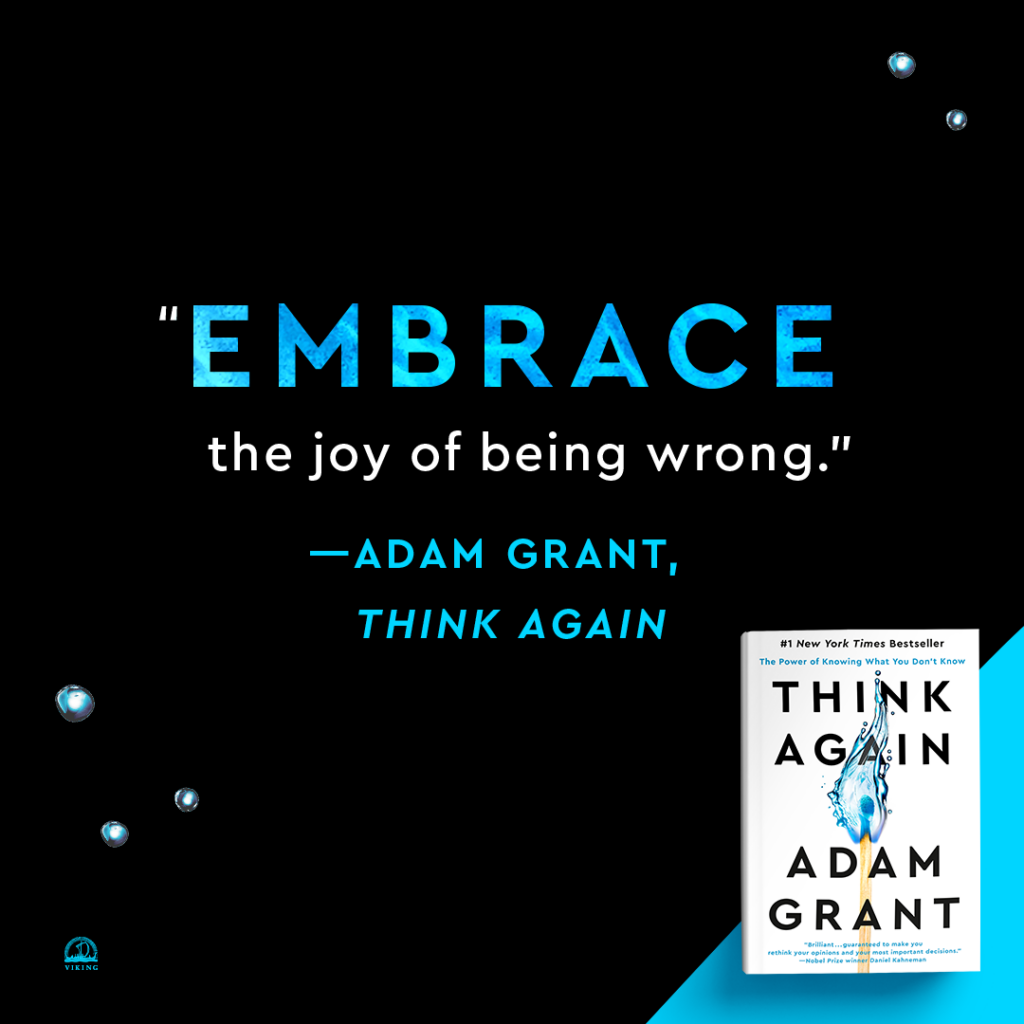 For many of the MediaAlpha team members who read it during our quarterly book club, “Think Again: The Power of Knowing What You Don’t Know” sparked a strong feeling of deja vu. Written by the organizational psychologist and Wharton School of Business professor Adam Grant, “Think Again” is a tribute to the power of open-mindedness, humility, and a scientific approach to problem-solving—all of which align closely with MediaAlpha’s core values.

Throughout the book, Grant shows how a willingness to accept “the joy of being wrong” and approach problems from a scientific, data-driven perspective can make us happier and more productive—in business, medicine, politics, and even our interpersonal relationships. The book couldn’t have been a better fit for MediaAlpha, where our team members are committed to a growth mindset and following the math wherever it takes us.

But just because the book aligned closely with our core values doesn’t mean our team members didn’t have a lot to learn from it. Here are five things we took from “Think Again: The Power of Knowing What You Don’t Know.”

1. Humility is a virtue

In order to reach the right conclusion, you need to be open to admitting that you might be wrong. In the book, Grant writes about the perils of the Dunning-Kruger effect, which happens when people overestimate their abilities. By contrast, he cites research that suggests impostor syndrome, which happens when people underestimate their abilities, can sometimes be a good thing because it can cause people to work harder and double-check that their assumptions are actually correct.

Throughout, Grant advocates for an approach of “confident humility,” where people believe they can accomplish what they set out to do, while still being open to the idea that their initial ideas might need some rethinking.

2. Being wrong is a golden opportunity

Grant also advises readers to savor the “joy of being wrong.” In the book, he points to a piece of wisdom he received from the Nobel Prize-winning psychologist Daniel Kahneman: When you discover that you’re wrong about something, it means you’re less wrong than you were before.

During our discussion, MediaAlpha team members acknowledged that while admitting a mistake to a client isn’t always easy, our partners appreciate when we’re honest and quick to correct our errors. Plus, as one team member points out, nobody is right all the time. As they put it, “if you look back and you think all the decisions you’ve made are correct, there’s obviously something wrong.”

In order to solve a thorny problem, it’s helpful to have people in your orbit who will push you to think differently about it. Grant recommends building a “challenge network” of people who you can trust to provide constructive criticism of your work. During our discussion, one team member shared how a new co-worker with a fresh, critical perspective helped them reimagine a challenge they’d been working on for years.

4. A safe space for questioning is key

You can’t have constructive criticism in the workplace if your team members don’t feel empowered to speak up when they see something they think is wrong. That’s why Grant says it’s important for organizations to foster “psychological safety,” a concept discussed at length in a previous MediaAlpha book club selection, Amy Edmonson’s “The Fearless Organization.” Grant describes psychological safety as “a climate of respect, trust, and openness in which people can raise concerns and suggestions without fear of reprisal.”

This idea of open, honest communication is one of the key pillars of our organizational philosophy. As our co-founder and CEO Steve Yi put it in the founder’s letter he wrote when we went public, “We know we’ll only reach our full potential—as individuals and as a company—when we’re honest about what’s working and what’s not. That’s why we create space for regular, open, constructive dialogue that not only celebrates accomplishments, but identifies areas for growth and improvement.”

5. Most things are more complex than they appear

One other takeaway from the book is that people often wind up being wrong when they try to simplify a complex issue. As an example, Grant points to a study about the health impact of coffee, which found that people who drank one or two cups a day had a lower risk of cognitive impairment than those who abstained from coffee drinking altogether, but that people who had more than two cups a day had a higher risk of cognitive impairment. Despite these nuanced findings, news stories about the study painted coffee as being either good or bad for the brain.

The upshot? Things are usually more complicated than they appear. And if you’re thinking with nuance and complexity, you’re less likely to be pulled off track than someone who’s thinking in black-and-white. As our co-founder and CEO said during our discussion, “It’s hard to have certitude up close.”

Our quarterly book club is just one of the ways we’re building a thoughtful, transparent culture that allows our team members to thrive. From our celebratory and collaborative all-hands week tradition, to our culture of radical candor, to our excellent pay and benefits, we’re fully committed to building the best workplace our team members have ever been a part of. It’s no wonder we’ve been named to so many “best places to work” lists.

Want to see for yourself what it’s like to work here? Good news: We’re hiring. Visit our website to see our open positions and learn more about working at MediaAlpha.

Millennials may be delaying major life events like homeownership and auto purchases, but insurance agents can earn plenty of new customers with the right approach